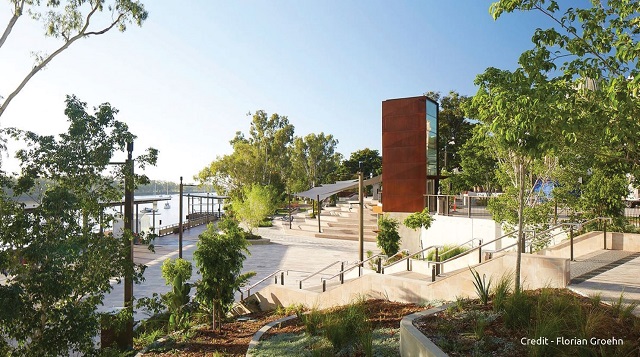 Lately there’s been some big changes going on in the CBD of Rockhampton.  It’s probably not news for the locals, but most out-of-towners will be amazed by the massive revitalisation of the riverside area and surprised to know that the planning started all the way back in 2014!

That’s when the Rockhampton Regional Council gathered property owners and business operators for a series of extensive meetings and workshops and began to collect views and opinions.  They didn’t leave the residents out of it and sent each Household a survey to gain ideas that could be added to the discussion. Then armed with this vast amount of feedback, the Council passed on their requirements to Urbis – the lead designers of the project.

Now considering how large this cache of information was the Council was quite succinct when stating their requirements and the Acting Mayor, Councillor Cherie Rutherford said, “the design brief given to Urbis was just a few simple words – urban, playful, elegant, creative, sustainable and smart”.  From the two awards that the design has already received, it’s safe to say that all six of the requirements have been well and truly met.

The resulting Riverside revitalisation has transformed the banks of Rockhampton’s iconic Fitzroy River into a mixed-use recreational hub for businesses, locals and visitors. And the city has received a sophisticated and contemporary design that’s sympathetic to its heritage buildings. The Fitzroy River has never looked better. Playground areas, lookouts, walkways, gardens and public art all work together to give the CBD a beautiful lift.

So, if you’re thinking of heading to Rockhampton soon why not come for the River Festival from July 12 to 14 and book some accommodation at Coffee House Apartment Motel, it’s only two blocks from the Fitzroy River so close to all the fun!